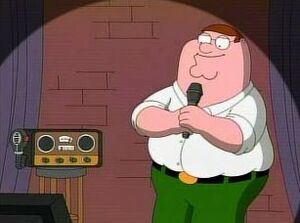 Richard Caruthers "Rich" Little (born November 26, 1938) is a Canadian-American impressionist and voice actor. He is known throughout the world as a top impersonator of famous people, resulting in his nickname, "The Man of a Thousand Voices".[1]

In "Quagmire's Baby", Peter Griffin becomes friends with him via a ham radio because he thinks that he is the ghost of Ronald Reagan.

Retrieved from "https://familyguy.fandom.com/wiki/Rich_Little?oldid=185979"
Community content is available under CC-BY-SA unless otherwise noted.