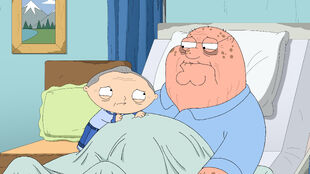 Rich Old Stewie
Stewie must visit a dying Peter in the future. 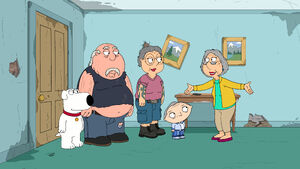 In the far future, Stewie is rich and living in California when Brian brings word that Peter is dying. Traveling back home, they pick up Chris and Meg, who have also gone on with their lives. On arrival, Stewie is appalled at the condition of the house. The family meets Peter, who extracts a promise from Stewie to take care of the family. 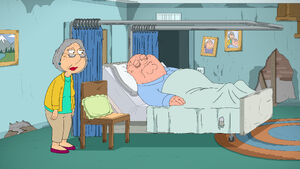 He rebuilds the house just in time before Peter passes away. But as he heads back home to California to share his money with the family after handing out a round of cigars to celebrate Peter's life, the latter recovers as the whole family shares a laugh over pulling a scam on him. However, he is aware of the ruse and had rigged the gas to stay on, blowing up the house behind him as Chris lights his cigar. As Brian begs him to put him out of his misery, Stewie suddenly realizes he is having a fantasy while trying to pick out a Halloween costume of an old man, having been afraid of growing old but now looking forward to it. After trying it on, he gets his dragging testicles tangled up with Herbert's.

At the same shop in closing, Meg has a momentary fantasy of being Evita Perón, before Peter snaps her out of it to make her the back half of a farting horse, which he insists on doing the farting.

Retrieved from "https://familyguy.fandom.com/wiki/Rich_Old_Stewie?oldid=219769"
Community content is available under CC-BY-SA unless otherwise noted.