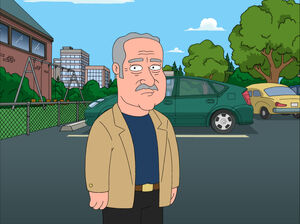 Richard Stephen Dreyfuss (born October 29, 1947) is an American actor known for starring in a number of film, television, and theater roles since the late 1960s such as Jaws, The Goodbye Girl, Close Encounters of the Third Kind, Always, Stakeout, Mr. Holland's Opus, American Graffiti and What About Bob?.

He reprises his role as "The Writer" in the Stand by Me segment of "Three Kings".

Dreyfuss appears and voices himself in "Peter-assment", seeing Terri Schiavo: The Musical in Quahog. His appearance inspires Peter Griffin to become a paparazzo.

Retrieved from "https://familyguy.fandom.com/wiki/Richard_Dreyfuss?oldid=196034"
Community content is available under CC-BY-SA unless otherwise noted.