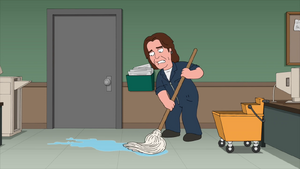 Rick Springfield (born Richard Lewis Springthorpe; 23 August 1949) is an Australian musician, singer-songwriter, and actor, winning a Grammy Award in 1981 for "Jessie's Girl". As an actor, he portrayed Dr. Noah Drake on the daytime drama General Hospital.

Rick provides his own voice in "Chap Stewie". When Stewie believes he has finally broken free of the rest of the Griffin Family, he notes that if he had remained he would have ended up like Rick Springfield today. A cutaway shows Rick as a janitor singing that he wished that he had "Jessie's Job".

Retrieved from "https://familyguy.fandom.com/wiki/Rick_Springfield?oldid=163827"
Community content is available under CC-BY-SA unless otherwise noted.