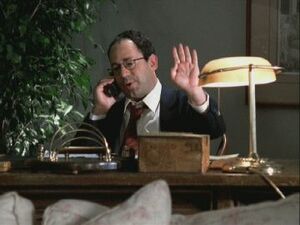 Ricky Blitt is a former writer and executive producer on Family Guy for the first two seasons. Other notable shows Blitt has worked on include The Parent Hood, The Jeff Foxworthy Show, Brotherly Love. He also created the short-lived FOX sitcom The Winner, which was executive produced by Seth MacFarlane.

He wrote the episodes "The Son Also Draws", "Death Is a Bitch", "There's Something About Paulie", "Mr. Griffin Goes to Washington", and "When You Wish Upon a Weinstein".

He voiced Stewie Griffin in "Brian Sings and Swings" when he exposed his odd laugh while watching Hope & Faith. He also made a cameo live-action appearance as Alyssa Milano's lawyer Joel in "Mr. Griffin Goes to Washington".

Retrieved from "https://familyguy.fandom.com/wiki/Ricky_Blitt?oldid=205711"
Community content is available under CC-BY-SA unless otherwise noted.