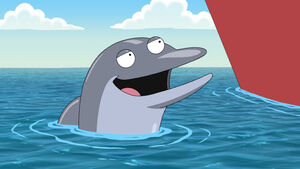 Ricky Dene Gervais (June 25, 1961) is a British actor, comedian, and writer, known for his work in the original British version of The Office and Extras. Gervais' film credits include the Night at the Museum film series, Cemetery Junction and The Invention of Lying.

Gervais provides the voice of Billy Finn, a talking dolphin in "Be Careful What You Fish For".

Retrieved from "https://familyguy.fandom.com/wiki/Ricky_Gervais?oldid=188542"
Community content is available under CC-BY-SA unless otherwise noted.