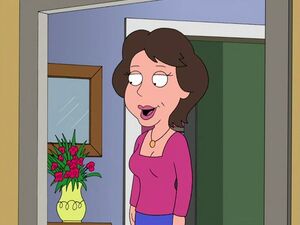 Rita is a fifty-year-old "cougar" that Brian Griffin dates in "Brian's Got a Brand New Bag". When Brian shows up for a date with Rita's daughter, named Nicole, he finds that she has already gone out with some other guy and Rita and Brian hit it off. To his family's amusement and dismay, they hit it off and get engaged only to have Rita break her hip while making love with Brian. Brian finds out that taking care of an older person can be a burden. He goes on to cheat on Rita, but after feeling much guilt, tries to patch things up. Rita can't forgive him, effectively ending their relationship.

She also still uses old-fashioned words, which confuses Brian. Then before leaving he admits he can't understand her.

In "Valentine's Day in Quahog", Stewie gathers scores of Brian’s former girlfriends including Rita to get to the bottom of why he’s unsuccessful in love. When Rita says that Brian is 'self-absorbed', Brian lashes back at the criticism, calling Rita an "old bag."

She is voiced by Nana Visitor.

Retrieved from "https://familyguy.fandom.com/wiki/Rita?oldid=210198"
Community content is available under CC-BY-SA unless otherwise noted.