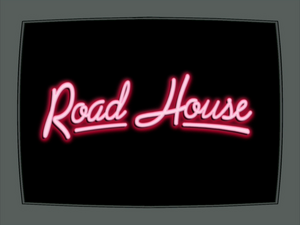 Road House is a 1989 American action film directed by Rowdy Herrington and starring Patrick Swayze and Sam Elliott as bouncers at a seedy roadside bar who protect a small town in Missouri from a corrupt businessman. It was nominated for a Golden Raspberry Award for Worst Picture, Worst Director and Worst Actor, all losing to Star Trek V: The Final Frontier.[1]

In "Brian's Got a Brand New Bag", Peter Griffin buys the DVD from a going-out-of-business sale at Quahog Video. After watching the film, Peter begins to believe that all of life's problems can be solved by kicking. After kicking his target, he would say the film's name as a catchphrase of sorts. The episode was dedicated to Swayze, having aired only 47 days after Swayze's death from pancreatic cancer. He would say the film's name in the same manner in "Business Guy" and "Trading Places".

In "Family Guy Viewer Mail No. 2", "Neville", the British Peter repeats "Row House" in reference to their home.

Peter uses all of the downstairs electrical outlets in the house to make toast in "Chap Stewie", proclaiming "Toast House."

Peter falls asleep after watching a Patrick Swayze Christmas movie and dreams he is visited by Patrick's ghost in "Don't Be a Dickens At Christmas", which contains several variations of Peter's Road House phrase.

Brian, in an effort to imitate Peter after they've swapped bodies in "Switch the Flip", tries to pacify a sexually unsatisfied Lois by stating "The movie Road House."

When Peter decides to take Brian back from the Hendersons in "Who's Brian Now?", he smashes through their window and gives them a Road House kick to the head, although Mr. Henderson doesn't get the reference, admitting he's never seen the film. Peter tells him that its about kicking.