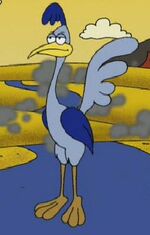 Road Runner is the protagonist of the Road Runner cartoons by Warner Brothers, as part of Looney Tunes/Merrie Melodies.

He is run over by an oblivious Peter Griffin who was traveling with Wile E. Coyote in "I Never Met the Dead Man".

When Lois demands sex from someone when Peter is unable to perform in "Peter Problems", Peter cautions her that Quagmire will show up just like the Road Runner. Quagmire proceeds to do just that, including carrying a sign stating "Giggity Giggity." Peter reassures Lois that she has nothing to really fear, as her vagina is really just a painted on hole.

Lois recounts some of Peter's stunts in "Coma Guy", including running into a tunnel painted by the Road Runner. In his defense, Peter notes that he saw the Road Runner go through it first.

Retrieved from "https://familyguy.fandom.com/wiki/Road_Runner?oldid=221594"
Community content is available under CC-BY-SA unless otherwise noted.