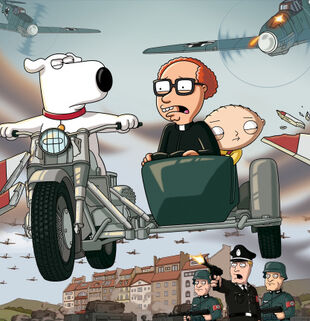 Plot: While the neighbors are watching the Academy Awards at the Griffins' house, Mort desperately needs to use the bathroom and Meg is using the main toilet, so desperately that he runs into Stewie's room into what appears to be a portable toilet. The "toilet" turns out to be a time machine, and he is sent to the past. Realizing this, and that he does not have the return pad, a device that would bring him back to the present, Stewie and Brian take the device and go back in time to save Mort. They end up in Warsaw, Poland and find Mort in a synagogue. It doesn't take long for them to realize that the date is September 1, 1939, the day of the Nazi invasion of Poland. 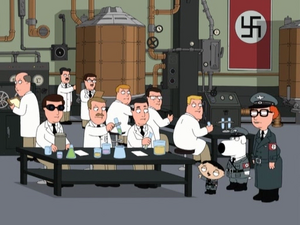 The three try to use the return pad, but it is broken, so they decide to go to England where they will be safe to fix it. They are chased by the Nazis, forcing them to make a getaway on a motorbike, followed by an elaborate undersea pursuit in a hijacked U-boat. The three make it to England safely, where Stewie finds that the return pad is out of uranium fuel, and that the only place they can find more in this time is at a "secret" nuclear testing facility in Nazi Germany. The three join the Royal Air Force and participate in a dogfight against the Luftwaffe to reach Berlin. Stewie disguises himself as Hitler and obtains the needed uranium. The group then runs into the real Hitler, who orders their execution, but they escape on the return pad to the present.

The group arrives back in Stewie's room, 30 seconds before Mort originally entered the time machine. To keep these events from repeating themselves, Stewie kills the Mort that traveled with them by shoving him into the time machine and blowing it up. The original Mort then enters the room and, now lacking the time machine, soils himself instead.