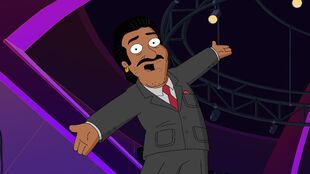 Road to India
Brian falls in love with a technical support representative. 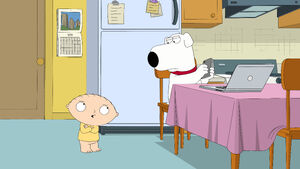 After Brian waits on hold for tech support for his computer, Padma, the agent flirts with him and he returns the interest. He continues their long-distance relationship, although Stewie is doubtful about the end result. Wishing he could be there with her, he sets off to India to be with her and Stewie tags along.

Arriving in India, they travel to Bangalore and find the call center where she works. They arrange for her to stand up so they can find her in the crowded room and then they embrace. She shows them around the city and invites them to a party with her family. There, Brian is shocked to discover that Padma is engaged, although she publicly breaks off the engagement to be with him.

Her father objects as he had already paid for the wedding, so Brian offers to cover the costs despite being broke. Despairing of getting enough funds, Stewie gives Brian the idea of going on a game show to make the money, but he immediately bombs by not knowing India or its culture. Apologizing to her, she reveals that her father give her younger sister to her former suitor, but his failure on the game show convinces her to dump him. 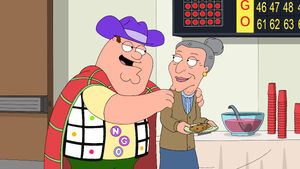 Meanwhile, Joe invites Peter to his bingo while Bonnie is out of town. Although reluctant, Lois pushes him into it. At the game, Peter discovers that Joe is considered one of the popular players. He continues to hate his time until he wins and gets a round of applause. His success goes to his head and he soon replaces Joe as the popular guy, much to his disappointment. Lois admonishes him when he starts going without Joe, but is ignored in her efforts. At the bingo hall, she brings Joe to the hall and insists he give Joe back his popularity, although he refuses. As a result, Lois turns Meg and Chris loose on him, forcing him to retreat.

Padma kisses Brian goodbye as the show is wrapped up with a Bollywood-style musical number involving everyone in the episode.

Retrieved from "https://familyguy.fandom.com/wiki/Road_to_India?oldid=219178"
Community content is available under CC-BY-SA unless otherwise noted.