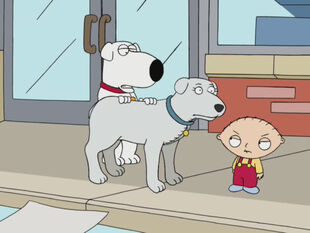 Road to Rhode Island
When Brian goes to get Stewie from his grandparents, they lose their plane tickets and have to find another way home.

Plot: The episode begins with Brian visiting his psychiatrist, where he reveals that he was born in a puppy mill and the circumstances under which he was taken from his mother as a puppy. Afterwards, Brian volunteers to pick up Stewie from his vacation at his grandparents’ summer home in Palm Springs, California, where Stewie frames a maid to amuse himself at dinner. At the airport bar, Brian gets very drunk and whilst Stewie comes to retrieve him their plane tickets are stolen. They stop at a rundown motel and the next day, they have to escape and steal a car because their credit card was rejected. In order to get home Stewie and Brian masquerade as crop dusters in order to steal a plane, which they immediately wreck. As the pair continue hitchhiking back to Quahog, they pass by a puppy mill near Austin, Texas, Brian’s birthplace. Upon arrival they discover that Brian’s mother was stuffed and turned into a table by the puppy mill owners as a memorial. With Stewie’s reluctant help, Brian gives his mother a proper burial. The pair eventually complete their journey home by riding in an open boxcar where they perform a musical duet.

Meanwhile, Lois urges Peter to watch relationship videos with her, but the videos turn out to be pornography hosted by Dr. Amanda Rebecca. She strips in her videos and says sexual things. Peter is initially reluctant but later becomes addicted to the videos, much to Lois’ chagrin. She manages to get herself on the end of one of the tapes in black lingerie to entice Peter. While kissing, Peter rewinds the tape, playing the part of Lois taking her robe off over and over.