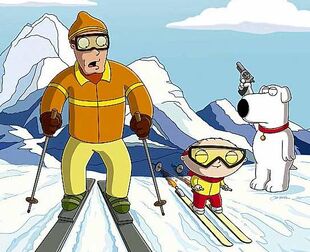 Road to Rupert
Stewie and Brian try to find a lost Rupert. 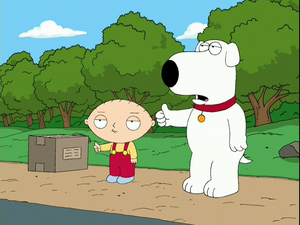 When the Griffins have a yard sale, Brian accidentally sells Stewie's beloved teddy bear Rupert. When Brian admits this to Stewie, they begin a search for Rupert. Stewie identifies DNA from the dollar bill Rupert was sold for, and he finds that the man who bought him, Stanford Cordray, lives on the same street. Unfortunately they discover that he has just moved, and see the last moving truck pull away. Despite Mayor Adam West's assistance, they fail to catch the truck, but luckily a box falls out of the back which reveals Cordray's new address as Aspen, Colorado.

The two hitch hike to Colorado, where they must get over the mountains to reach Aspen. They are able to rent a helicopter, due to a dance routine which Stewie and Brian perform with Gene Kelly. Inevitably however, Brian crashes the helicopter into a mountain. They are forced to walk the remainder of the way to Aspen, where they find Stanford living in an expensive house. Stanford has given Rupert to his own son, but Stewie notices that Stanford is a champion skier and he challenges him to a race.

Stewie looks as if he will win the race when he deploys rockets on his skis. Failing to watch where he is going, he crashes into a tree, causing him to lose the race. The terms of the wager were that Brian would have to stay in Aspen with the Cordrays if Stewie lost, but Stewie instructs the “ski room” butler to pour tea on the family’s son, allowing Stewie to take Rupert and the two to make their escape. Stewie carjacks a man and they drive home. 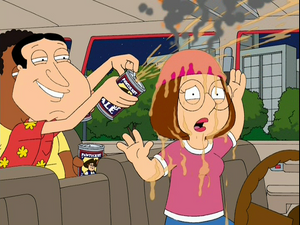 Meanwhile, Peter purchases his own "Evil Knievel" gloves and he attempts to pull off a trick in his car. He ends up crashing his and two other cars. The next day, Joe is forced to revoke Peter’s driver’s license for reckless driving. After Peter annoys Lois when he is stranded at home, Lois has Meg become his personal driver. Peter and his friends become so annoying for Meg that she has a fit of road rage and she causes a fender bender. After the driver of the other car insults Meg, she attacks him. Peter is so impressed with this that he begins to enjoy Meg’s company and he tells her that he realizes that she is a really wonderful daughter. Eventually, however, Peter has his license given back to him. Meg expresses her worry that Peter will go back to treating her with disrespect. Peter tells Meg that although he will appear to still treat her badly in front of the rest of the family, he now secretly considers Meg his best friend.

Retrieved from "https://familyguy.fandom.com/wiki/Road_to_Rupert?oldid=216364"
Community content is available under CC-BY-SA unless otherwise noted.