Road to the North Pole 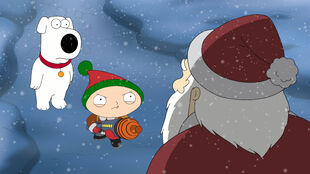 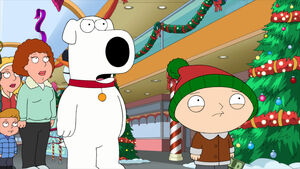 Brian begrudgingly takes Stewie to the mall, only to get the brush-off from Santa. As a result, Stewie vows to kill Santa and forces Brian to drive him to the North Pole. Brian tries to trick him by taking him to a carnival themed to Santa's Village but Stewie fails to fall for the ruse. Stewie hitches a ride with a truck driver to Canada with Brian in pursuit. When Stewie accidentally fires a flare pistol in the truck causing a major wreck, Brian and Stewie find themselves stranded until a passer-by offers them the use of his snowmobile. 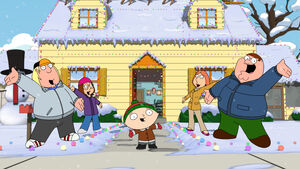 Driving until they run out of gas, they take shelter in an old cabin and push on the next morning on foot until they reach Santa's Workshop only to find a vast toxin-spewing industrial complex. Santa turns out to be a sickly old man, the elves deformed from the toxins and inbreeding in an attempt to keep up with the toy demand and the reindeer are carnivorous monsters. When Santa collapses, Brian and Stewie attempt to make the deliveries themselves but things go horribly wrong when they are forced to break into their first house, beat the owners senseless and tie up their daughter only to find they had the wrong house. Everyone else awakes to find out they received no presents. In a final attempt to save the holiday, they go on television to plead for the world to show some restraint in their gift requests, limiting everyone to one gift each. Everyone agrees to the request and by the following year Santa has recovered and the elves rejuvenated.

Previous Episode /// Road to the North Pole \\\ Next Episode