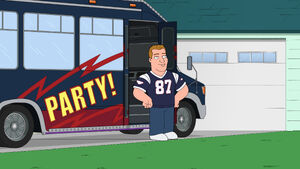 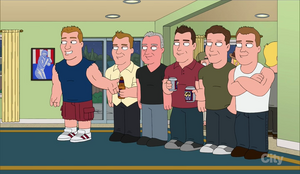 Robert Paxton Gronkowski (born May 14, 1989), nicknamed "Gronk," was an American football tight end for the New England Patriots of the National Football League (NFL) until his retirement in 2019.

Gronk provides his own voice in "Gronkowsbees" when he becomes an annoying neighbor to Peter and the gang. His brothers, Chris, Dan, Glenn and father Gordon, also appear and have voice credits. Brother Gordie Jr. appears, but doesn't have a voice credit.

Lois attempts to put guest Sarah Paulson in her place in "You Can't Handle the Booth!" when she points out that Gordon Gronkowski is in this wiki and she isn't.

In a futuristic Quahog in "Rich Old Stewie", nearly everything is named after Tom Brady, except for the Rob Gronkowski Library which only contains a label ripped off a muscle milk bottle.

Retrieved from "https://familyguy.fandom.com/wiki/Rob_Gronkowski?oldid=219751"
Community content is available under CC-BY-SA unless otherwise noted.