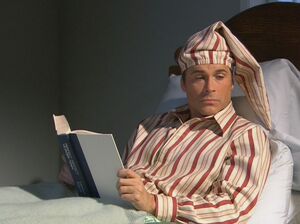 Robert Hepler "Rob" Lowe (born March 17, 1964) is an American actor. He became known after appearing in 1980s movies such as The Outsiders and St. Elmo's Fire, which included other members of the Brat Pack. Lowe is also known for his role as Sam Seaborn on The West Wing and as Senator Robert McCallister on Brothers & Sisters.

Stewie plays a game of guessing "straight or gay" with a hairdresser in "Brian Does Hollywood" and is surprised that Rob is straight.

He provides the voice for Stanford Cordray in "Road to Rupert". He also appears as himself in a live action scene with Adam West in "Not All Dogs Go To Heaven".

Retrieved from "https://familyguy.fandom.com/wiki/Rob_Lowe?oldid=163644"
Community content is available under CC-BY-SA unless otherwise noted.