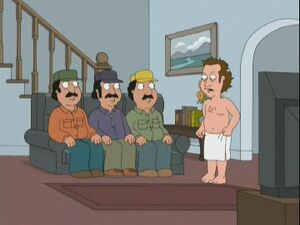 Robert Michael "Rob" Schneider (born October 31, 1963) is an American actor, comedian, screenwriter and director. A stand-up comic and veteran of the NBC sketch-comedy series Saturday Night Live, Schneider went on to a career in feature films, including starring roles in the comedies Deuce Bigalow: Male Gigolo and The Hot Chick.

He appears in "Model Misbehavior" as a date for the loser of Stewie Griffin's red light-green light game.

In "Lois Kills Stewie", the tied up Griffins play a game of starting a fake rumor about Schneider that turns out to be apparently true.

Retrieved from "https://familyguy.fandom.com/wiki/Rob_Schneider?oldid=217438"
Community content is available under CC-BY-SA unless otherwise noted.