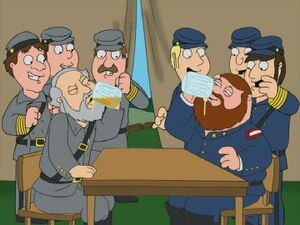 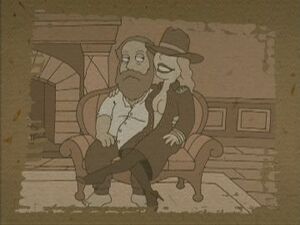 Robert Edward Lee (January 19, 1807 – October 12, 1870) was a career military officer who is best known for having commanded the Confederate Army of Northern Virginia in the American Civil War. In early 1861, President Abraham Lincoln invited Lee to take command of the entire Union Army. Lee declined because his home state of Virginia was, despite his wishes, seceding from the Union. The son of U.S. Revolutionary War hero, Henry ("Light Horse Harry") Lee III, and a top graduate of West Point, Robert E. Lee distinguished himself as an exceptional officer and combat engineer in the United States Army for 32 years before resigning to join the Confederate cause. By the end of the American Civil War, he was commanding general of the Confederate army. He became a postwar icon of the South's "lost cause," and is still admired to this day.

He appeared in "Peter, Peter, Caviar Eater" as a customer of Cherrywood Manor's whorehouse.

He is shown losing a drinking contest to Ulysses S. Griffin in "E. Peterbus Unum" and he agrees to end slavery on the condition that southerners don't have to read.

He was also the subject of a Civil War re-enactment play in "To Love and Die in Dixie" where he defeated Grant.

Stewie Griffin renames his "Lincoln Logs" to "Lee Logs" in "You Can't Do That On Television, Peter" due to the buildings created with them resembling slave quarters.

Peter declares victory over hijackers in "Passenger Fatty-Seven" as quicker than the treaty signing at Appomattox, leading to Lee agreeing to surrender but allowing the South to continue to be dicks forever.

Retrieved from "https://familyguy.fandom.com/wiki/Robert_E._Lee?oldid=191979"
Community content is available under CC-BY-SA unless otherwise noted.