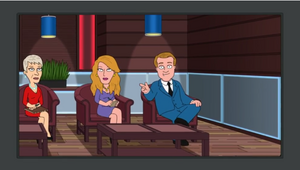 Robert Herjavec (born September 14, 1962) is a Canadian businessman, investor, and television personality, appearing on shows such as Dragon's Den and Shark Tank.

When the guys take an idea they have on Shark Tank in "Bri-Da", Robert, as himself, offers to bankroll them in exchange for only 10%. However, they look to see if anybody else is willing to cover them instead.

Retrieved from "https://familyguy.fandom.com/wiki/Robert_Herjavec?oldid=215288"
Community content is available under CC-BY-SA unless otherwise noted.