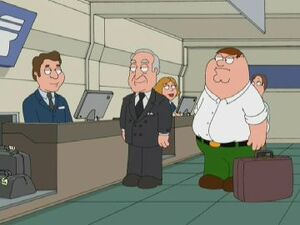 In "Peter's Two Dads", Peter Griffin complains when he is stuck behind Robert Loggia in the airport. When asked to spell his name, Robert Loggia spells it out using each letter to start phrases about himself being recognized. He is voiced by John Viener.

He appears as himself in "Brothers & Sisters" shouting that an AIDS joke is "NOT OH-KAAAAAY!!!!". A similar joke is used in "Call Girl" when he appears twice to announce "8 fucking hours later."

Retrieved from "https://familyguy.fandom.com/wiki/Robert_Loggia?oldid=213492"
Community content is available under CC-BY-SA unless otherwise noted.