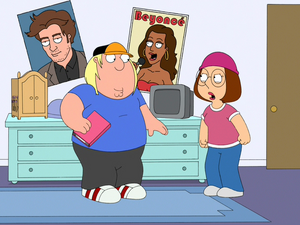 Robert Douglas Thomas Pattinson (born 13 May 1986) is an English actor, model, musician, and producer. Born and raised in London, Pattinson started out his career by playing the role of Cedric Diggory in Harry Potter and the Goblet of Fire. Later, he landed the leading role of Edward Cullen in the film adaptations of the Twilight novels by Stephenie Meyer.

Pattinson appears beginning in "Brian Griffin's House of Payne" as a poster on Meg Griffin's wall. The DVD commentary explains that they finally updated the posters in her room with a Beyoncé poster and a Robert Pattinson poster.

Robert Pattinson is one of the guests at the Teen Choice Awards the Griffin family attends on the night of Meg's 18th birthday in "Quagmire and Meg".

Retrieved from "https://familyguy.fandom.com/wiki/Robert_Pattinson?oldid=151892"
Community content is available under CC-BY-SA unless otherwise noted.