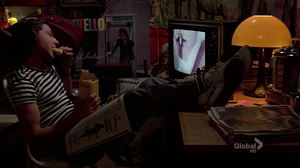 Robert Romanus (born July 17, 1956), also billed as Bob Romanus, is an American actor and musician who has starred in film and television. He is perhaps best known for his role in the 1982 comedy Fast Times at Ridgemont High as the ticket scalper Mike Damone, and as Natalie Green's boyfriend Snake on The Facts of Life.

Robert appears as Mike Damone from a live-action clip of Fast Times at Ridgemont High in "Chris Cross".

Retrieved from "https://familyguy.fandom.com/wiki/Robert_Romanus?oldid=172339"
Community content is available under CC-BY-SA unless otherwise noted.