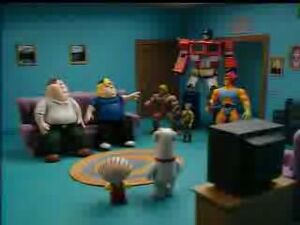 Robot Chicken is a program on Cartoon Network's Adult Swim which was co-created by Seth Green. The program features stop-motion animation of action figures in various skits and shorter vignettes, similar to Family Guy cutaway gags. It premiered on February 20, 2005. Since airing, several episodes have featured a nerdy school boy who is voiced by Green in the same way he'd perform Neil Goldman.

During the final minutes of Blue Harvest, Peter and Chris have a debate about the program, which had previously parodied Star Wars. Peter claims it's not a real TV show since it's on Cartoon Network, while Chris, voiced by Seth Green, defends the show. The argument is rekindled in Something, Something, Something, Dark Side.

In It's A Trap! the Emperor and Darth Vader criticize the career of Seth Green to turn Luke Skywalker over to the dark side of the Force.

In "Road to the Multiverse", Stewie and Brian travel to the Robot Chicken universe, where Stewie makes a joke about the show being on Cartoon Network by asking the Robot Chicken versions of Peter and Chris how it feels to be on a major network (FOX) for thirty seconds, which makes Chris mad.

Peter is forced to explain the difference between Mr. Robot and Robot Chicken to Chris in "Emmy-Winning Episode".

When the real cast interrupts the Griffin Family during the recording of a DVD commentary in "You Can't Handle the Booth!", Chris gives kudos to Seth Green for Robot Chicken.

In Robot Chicken's "Suck It", Peter is shown as an Adult Swim judge in a parody of General Zod's trial in the 1978 version of Superman, cancelling Robot Chicken.[1]

In "Help Me", the show creators meet Seth MacFarlane while trying to beg for work after Chicken is canceled. MacFarlane points out that Green already works on Family Guy but the latter insists he needs more than the hundreds of thousands of dollars that he earns voicing Chris. Simply mentioning Robot Chicken gets the show renewed in the style of of one of Family Guy's cutaway gags, which continues though several other skits.[2]

In "Immortal", Peter is shown as one of the "monster zoo" creatures.[3]

Retrieved from "https://familyguy.fandom.com/wiki/Robot_Chicken?oldid=211564"
Community content is available under CC-BY-SA unless otherwise noted.