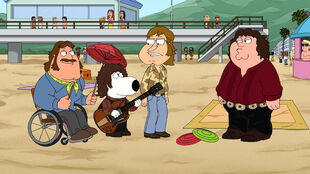 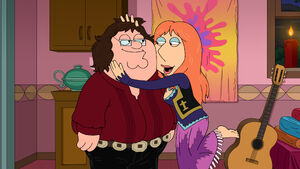 While the guys are looking through records at a store, they begin to talk about how badly rock films approach their subjects. This leads to a rehashing of the meeting of The Doors.

The band meets together on a beach, but Jim Morrison downplays being serious about music in order to pursue a toxic relationship. well performing at the Whiskey a Go Go, his need for Nestle Strawberry Quick to calm his nerves while being lactose intolerant begins to interfere with his performances, but his girlfriend is still able to help him sign a record contract. His career is over when he can't find his penis to show at a concert and he moves to Paris where he dies of a heroin overdose. Peter finishes by noting that if you and your friends want to ditch your girlfriends, put on the film The Doors and it'll be just you and your buddies. 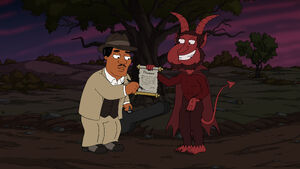 As the guys can continue their conversation, Jerome take issue with Peter's assertions that white people invented rock and tells the story of Muddy Drawers, the real father of rock.

Muddy grew up so poor his family lived at the bottom of the Mississippi river, with a one-string guitar and that string doubled as his belt. In his desperation to hit the big time, he made a deal with the Devil and was discovered by a sound mixer. As he began to hit it big, he is given a racist driver in order to help him acclimate to abuse. They become friends when they discover that they have more in common than they expected, but that trust is broken when it turns out the driver is Elvis Presley, and he steals Muddy's music and hits it big on his own, leaving Muddy to fade into insignificance. 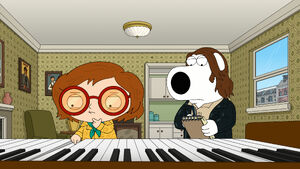 The guys spy Stewie in the record store looking at records, and, when Joe complain about him getting his own story, Peter points out that he doesn't have funny kids as Stewie settles on an Elton John record.

Elton grew up wanting to be a tax accountant, but his sexually ambiguous dad would have nothing to do with it. In an effort to write songs to convince the world he was straight, Elton would eventually meet his songwriter and, after signing with a producer, hits it big. But while trying to make their way to a party in the Hollywood Hills, Elton and his songwriter have a falling out, which leads to their breakup, although they reconcile when Elton ends up in the hospital. As Stewie and Brian take a look at how Elton looks today, they decide to steer their insults to Sean Hannity, and encourage the audience to participate on the show's YouTube page.

As the guys are wrapping up their purchases, Peter wants to pay homage to four lads who made it all possible in 1962, which Quagmire takes to mean The Beatles, but Peter is actually referring to The Trashmen, which leads to a clip of the guys performing "Surfin Bird".