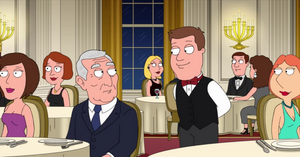 Roger Jason Stone Jr. (born August 27, 1952) is an American political consultant, lobbyist and strategist known for his use of opposition research, usually for candidates of the Republican Party. Stone had been accused of coordinating a smear campaign against Hillary Clinton to benefit Donald Trump with Wikileaks and then lying to cover it up. Stone was arrested and charged less than two weeks after "Trump Guy" aired.[1]

When offered a choice of alcoholic beverage at a White House dinner in "Trump Guy", Stone requests to take the '5th.'

Retrieved from "https://familyguy.fandom.com/wiki/Roger_Stone?oldid=210152"
Community content is available under CC-BY-SA unless otherwise noted.