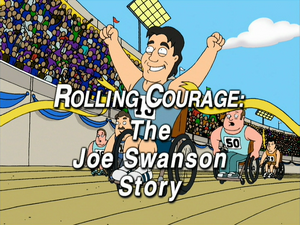 Rolling Courage: The Joe Swanson Story is a biographical film about Joe Swanson, a paraplegic cop, following the events of his rise to athletic stardom. It is based on events that occurred during "Ready, Willing, and Disabled". The film was produced and released in the same episode. It starred Tony Danza as Joe Swanson, Valerie Bertinelli as Bonnie Swanson and Bea Arthur as Peter Griffin.

Retrieved from "https://familyguy.fandom.com/wiki/Rolling_Courage:_The_Joe_Swanson_Story?oldid=225354"
Community content is available under CC-BY-SA unless otherwise noted.