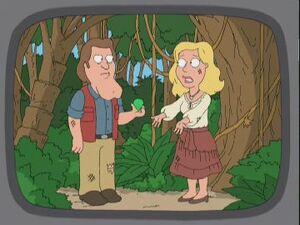 Romancing the Stone is a 1984 American action-adventure film, and has many elements that might categorize it as a romantic comedy. Directed by Robert Zemeckis, it stars Michael Douglas, Kathleen Turner and Danny DeVito. The film was followed by a 1985 sequel, The Jewel of the Nile.

In Barely Legal, Mayor Adam West watches the film, and when Joan Wilder hides in Jack T. Colton's chin, he takes it so seriously that he believes she's still missing. He sends the entire able Quahog police force to Colombia, South America to rescue her. It is only at the very end of the episode that the search is called off.

Retrieved from "https://familyguy.fandom.com/wiki/Romancing_the_Stone?oldid=184836"
Community content is available under CC-BY-SA unless otherwise noted.