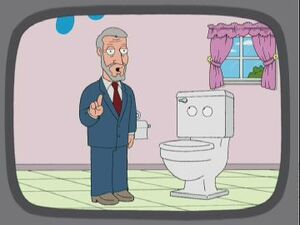 He and Hungry Hank were part of an educational video in Bill and Peter's Bogus Journey in which Brian needed to learn to use the toilet.

Before he passed away, Scheider lent his voice to the "Three Kings" reprsing his role as narrator of Stand By Me.

Retrieved from "https://familyguy.fandom.com/wiki/Roy_Scheider?oldid=80529"
Community content is available under CC-BY-SA unless otherwise noted.