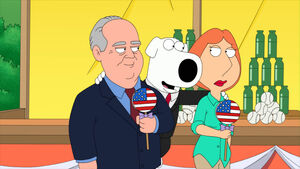 Rush Hudson Limbaugh III (born January 12, 1951) is a sometimes controversial conservative radio and television host and author. He was also a commentator for ESPN's football coverage, until he made a comment that the media desired the success of a black quarterback in the NFL, specifically referring to Donovan McNabb, then of the Philadelphia Eagles, which got him into trouble. Limbaugh resigned from ESPN three days later.

Limbaugh provided his voice in Blue Harvest as he decried the hiring of Lando Calrissian as affirmative action in a parody of his show.

Limbaugh also appeared in "FOX-y Lady" after Lois Griffin, a Fox News Channel reporter at the time believed he was in a homosexual relationship with Michael Moore, it is revealed that he is one of the many celebrity personas of Fred Savage.

He appears in "Excellence in Broadcasting" where it is revealed that he is not actually Savage's persona, because that story became a lie just by being reported by Fox News. He meets Brian Griffin at a book signing, convinces him to actually read one of his books, and the two become friends. Griffin temporarily becomes Republican, but Limbaugh tells him he'll always be a liberal. After a brief scuffle, they show signs of mutual respect. It is also revealed that he can transform into an eagle.

Limbaugh appears as the Rancor in It's A Trap!.

Retrieved from "https://familyguy.fandom.com/wiki/Rush_Limbaugh?oldid=156595"
Community content is available under CC-BY-SA unless otherwise noted.