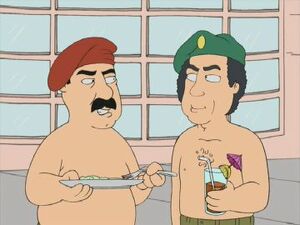 On Family Guy, he appears in "E. Peterbus Unum", though only briefly, first advising President Peter Griffin on how to run Petoria and then at Peter's party, talking to Muammar al-Gaddafi about the Seinfeld episode "The Junior Mint".

Hussein was also seen in "Boys Do Cry" in a picture with George W. Bush.

In "Baby Not On Board" The Griffin family visited the site of the 9/11 terrorist attacks in New York and Peter thought that Saddam Hussein was behind it, twisting Brian's logic.

Retrieved from "https://familyguy.fandom.com/wiki/Saddam_Hussein?oldid=149248"
Community content is available under CC-BY-SA unless otherwise noted.