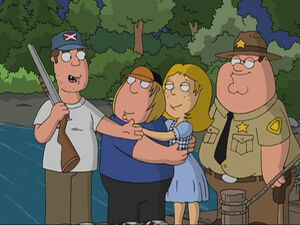 Sam is a young girl who lives in Bumblescum, Alabama who appeared in "To Love and Die in Dixie". She befriends Chris Griffin when the Griffin family move there as part of the Witness Protection Program. At first, Chris hung out with her and thought she was a boy, and was later very disturbed when she kissed him. He was relieved to learn that she was a girl, so he could start a proper relationship with her. Chris has not seen her since they moved out of the South and returned to Quahog. He promised to write to her every day, and she promised to learn to read.

She is voiced by Kathleen Wilhoite.

Retrieved from "https://familyguy.fandom.com/wiki/Sam?oldid=217139"
Community content is available under CC-BY-SA unless otherwise noted.