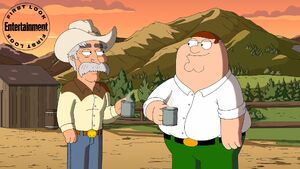 Samuel Pack Elliott (born August 9, 1944) is an American actor, known for his work in Road House, The Big Lebowski, Tombstone and the 2007 version of Ghost Rider.

Sam provides voice-over narration in "Girl, Internetted", including noting the fact that he appeared in The Big Lebowski and Road House.

Retrieved from "https://familyguy.fandom.com/wiki/Sam_Elliott?oldid=232009"
Community content is available under CC-BY-SA unless otherwise noted.