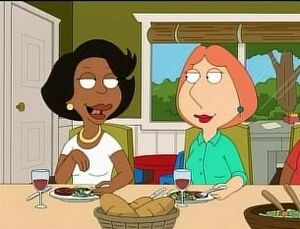 Sanaa McCoy Lathan (born September 19, 1971) is an American actress. She starred in numerous movies, including the box-office hits Love & Basketball, Alien vs. Predator, Something New, and The Family That Preys, and was nominated for a Tony Award for her performance on Broadway in A Raisin in the Sun.

She stars as the voice of Donna Tubbs-Brown in The Cleveland Show. She reprised that role for "The Splendid Source" and "Cool Hand Peter" as well as after Cleveland brings the family back to Quahog in "He's Bla-ack!".

She also portrays the classic TV character Clair Huxtable originated by her Raisin costar Phylicia Rashad on The Cosby Show in "Tom Tucker: The Man and His Dream".

Retrieved from "https://familyguy.fandom.com/wiki/Sanaa_Lathan?oldid=162566"
Community content is available under CC-BY-SA unless otherwise noted.