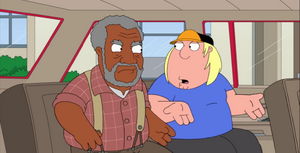 Sanford and Son is an American sitcom that premiered on the NBC television network on January 14, 1972, and was broadcast for six seasons. The final original episode aired on March 25, 1977. The show was based on the BBC sitcom Steptoe and Son. The show starred Redd Foxx as Fred G. Sanford, a 65-year-old junk dealer living in the Watts neighborhood of Los Angeles, California; and Demond Wilson as his 30-year-old son, Lamont Sanford.

Peter Griffin imagines himself and his dad, Francis Griffin in a Sanford and Son moment in "Holy Crap".

Stewie Griffin forces Brian to help him get into the Hannah Montana concert by posing as Kanye West in a DVD exclusive scene in "Hannah Banana". The security officer challenges Brian to sing something and Brian starts singing "Freddy Sanford", which is sung to the tune of the theme to Sanford and Son, and is about Foxx's character. The performance allows them to gain entry into the concert.

In "Blue Harvest", Foxx is one of the fighter pilots. When his fighter ship is shot down, he exclaims "I'm comin', 'Lizabeth!" This is an allusion to the comedy routine where Foxx's Fred Sanford character will fake a heart attack when he isn't getting his way or is greatly shocked.

During the America's Got Talent audition, Peter plays the Sanford and Son theme song on harmonica.

When Chris is demoted to vocational school in "Stand By Meg", Peter defers to Fred Sanford for advice, but his speech confuses Chris, who notes that not only has his show been long canceled, but he has also been dead for thirty years.

Peter's eulogy for Angela in "Pawtucket Pete" contains part of the theme song to Sanford and Son.

Retrieved from "https://familyguy.fandom.com/wiki/Sanford_and_Son?oldid=222030"
Community content is available under CC-BY-SA unless otherwise noted.