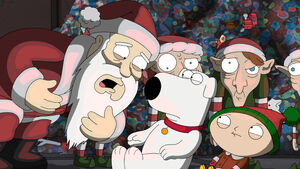 Santa Claus, also known as Saint Nicholas, Father Christmas, Kris Kringle or simply Santa, is the legendary and mythical figure who, in many Western cultures, brings gifts to the homes of the good children during the late evening and overnight hours of Christmas Eve, December 24 or on his Feast Day, December 6 (Saint Nicholas Day).

Although he is intended as a guy in a costume at a mall, Santa somehow knows to bring Stewie Griffin some plutonium in "A Very Special Family Guy Freakin' Christmas". This same episode also features the holiday special Kiss Saves Santa, starring the band KISS, who saves him from a pterodactyl. Mrs. Claus is also in the special. Santa also appears in Stewie's dream in this episode.

When Peter Griffin comes down the chimney of the home of Jack & Sarah to retrieve Stewie in "Love Thy Trophy", he explains to their ethnically diverse adopted children, including Pablo and Li, that he is Santa, and he is practicing for the big day. This sparks an argument between the children, who each believed that Santa Claus originated from their respective ethnicities.

According to the "Untitled Griffin Family History", the state of Kansas mandates the creationist belief that Jeannie, from I Dream of Jeannie, created Santa Claus.

In "Sibling Rivalry", he is caught peeking in on a couple making love, he slowly undoes his top until told to get out.

During Stewie's dinner date with Jillian Russell, he uses Santa as an example of a fat person to force Jillian to purge herself so he can get her teeth in "Prick Up Your Ears".

Stewie Griffin plans to kill him in "Road to the North Pole", after his opportunity to speak with mall Santa is taken away from him. This year, he requests yellowcake uranium. However, it is revealed that Christmas and its over-commercialization has made Santa overwhelmed. He had to increase his workforce by inbreeding his elves, leaving them severely deformed and some blind, and his reindeer became "wild, feral beasts" by feeding on the elves who wandered out into the snow to die. Stewie and Brian become Santa, and beat the residents of a house they were not supposed to go to. The reindeer eat each other while Stewie and Brian deal with the fiasco at Dan's home. When nobody gets their presents, they bring Santa to Quahog 5 News and pleads with everyone to limit themselves to one gift a year. Everyone in the North Pole returns to normal over the next year, including Santa and the elves' health.

Santa Claus appears in a space suit along with Peter, Xerxes the falcon and a T-Rex when Peter fantasizes about having his own television show in "Call Girl".

In some appearances, Santa is voiced by Seth MacFarlane. In "Road to the North Pole", he is voiced by Bruce McGill.

Peter's defense of Quagmire for statutory rape in "Quagmire's Mom" involves intercepting letters for Santa in the style of Miracle on 34th Street. A cutaway has Mrs. Claus noting the lack of mail for them and Santa snarky notes that the letters are for him as no one writes her.

When Stewie finds out that he will only become 5'1" as an adult, he worries about becoming an outcast like "Rudolph the Uncircumcised Reindeer" in "Papa Has A Rollin' Son". Santa tries to reassure him, but takes umbrage that Rudolf consulted with Mrs. Claus who disapproves of him being circumcised.

Santa becomes annoyed when Peter abuses playing Santa to score favors in "How the Griffin Stole Christmas". When Peter refuses to give up portraying Santa, the pair engage in a war of pranks until Santa nearly strangles Peter.

After taking Stewie to meet Santa at the mall, Meg begins to have romantic fantasies of Santa in "Christmas is Coming".

Retrieved from "https://familyguy.fandom.com/wiki/Santa_Claus?oldid=218415"
Community content is available under CC-BY-SA unless otherwise noted.