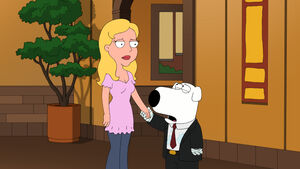 Her film credits includes a guest-starring role in the 2008 Nickelodeon series, Merry Christmas Drake and Josh as well as lead roles in several independent productions including iCrime, A Numbers Game, Near Fall and Wet and on television's Monk.

Sara provides assorted voices in Family Guy, including Kate in "The Blind Side".

Retrieved from "https://familyguy.fandom.com/wiki/Sara_Fletcher?oldid=178957"
Community content is available under CC-BY-SA unless otherwise noted.