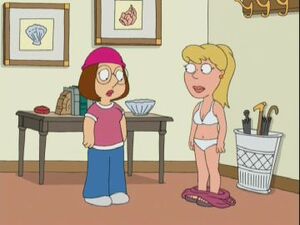 Sarah is a lesbian girl who becomes Meg Griffin's science partner in "Brian Sings and Swings". She invites Meg to join her after-school club. Meg accepts, but later regrets it when she finds out the club is a Lesbian Alliance Club. Sarah believed Meg was gay, which is why she invited her. Meg pretends to be gay to fit in, but when she finds out that Sarah is attracted to her, she tells her the truth.

While hanging out with Meg in her house looking at girls in magazines, Sarah was kissed by Meg's mother Lois, which she enjoyed. Before Meg told the truth, Sarah thought she wanted to have sex with her and she pulled down her dress. She believes that being gay is only a choice for girls. Glenn Quagmire had filmed her twice, the second time with filmmakers Mike Schank and Mark Borchardt, unsatisfied with the results.

Sarah is voiced by Alexandra Breckenridge.

Retrieved from "https://familyguy.fandom.com/wiki/Sarah?oldid=222966"
Community content is available under CC-BY-SA unless otherwise noted.