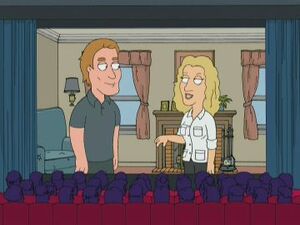 Sarah Jessica Parker (born March 25, 1965) is an American film, television and theatre actress and producer. She is best known for her leading role as Carrie Bradshaw on the HBO television series Sex and the City, for which she won four Golden Globe Awards, two Screen Actors Guild Awards and two Emmy Awards.

In "PTV", Peter Griffin doesn't understand why the FCC is overcensoring many television shows, however they continue to allow Parker on television when she looks like a foot.

Peter believes he is tough because he saw half of Failure to Launch, also starring Matthew McConaughey, in "Peter's Two Dads".

Carter Pewterschmidt insists on testing Parker's show Divorce on monkeys in "Regarding Carter".

Retrieved from "https://familyguy.fandom.com/wiki/Sarah_Jessica_Parker?oldid=222866"
Community content is available under CC-BY-SA unless otherwise noted.