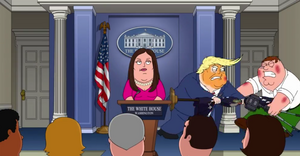 Sarah appears in "Trump Guy", delivering a briefing in which she claims to have no knowledge of a fight between the President and Peter, even as their battle takes place behind her.

Retrieved from "https://familyguy.fandom.com/wiki/Sarah_Sanders?oldid=225143"
Community content is available under CC-BY-SA unless otherwise noted.