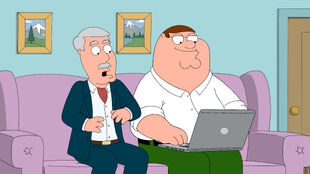 Scammed Yankees
Peter and Carter end up in Nigeria when they fall prey to a scam.

Plot: When Babs and Lois go out for a spa day together, Peter is left to entertain Carter, as Babs no longer trusts him to be left alone. He struggles to find something of interest, but ends up having a good time with him when he introduces him to the internet. Checking their e-mail, they find an offer from a “Nigerian Prince” that offers to give Carter a million dollars in exchange of an advance of funds. But after they follow through, they find out that it was a scam. Carter looses his temper at Peter for being swindled and vows that they will go to Africa together to get the money back. When Carter arrives to pick Peter up for their trip, Peter informs him that he kept it a secret from Lois. 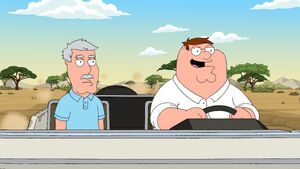 In Africa, they arrive at the village where they sent the money to, but are immediately captured by local gunmen. Held prisoner, Carter informs them who he is and is treated as a hero for saving the village. However, Carter insists they tear everything they have down even though they can't give him back the money. Peter stands up to Carter, but he pays the villager's to lock Peter up again. Peter writes a memoir that gets picked up and turned into a news story, which Lois hears and goes to Africa to get her father and Peter back. She arrives in time to keep Peter from being executed and finds that her father is unhappy about no longer being trusted alone in his old age. He promises to send money to help rebuild the village and apologizes to Peter. 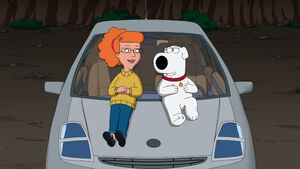 Meanwhile, Brian gets annoyed when Meg's friends come to visit, but when they ask him to take them to field hockey practice, he thinks he has found a way to get rid of them for a while. When Brian drops them off at school, Brian finds a gym bag left in his car and ends up walking in on a partially dressed Patty in the changing room, and is instantly attracted to her. Telling Stewie about what he saw, he points out that she is in high school. When Meg arrives, he pushes her for information about her likes. Pretending to bump into the girls at the mall, Brian gives Patty an extra Build-A-Bear he made and invites her out. Meg objects again due to Patty's age, but Brian continues to brush it off. He arrives to pick her up and they both ignore the objections, going on a date. As they watch the stars, Brian nearly gets her to take her sweater off and Meg arrives to confront Patty personally. Meg is forced to admit that she had tried to downplay Patty's looks to keep her in their circle of friends, and Patty agrees to continue to be a friend.