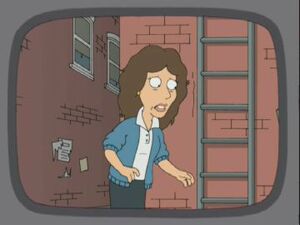 Scarecrow and Mrs. King is an American television series that aired from October 3, 1983, to May 28, 1987 on CBS. The show starred Kate Jackson and Bruce Boxleitner.

In "Deep Throats", instead of Boxleitner’s character, secret agent Lee “Scarecrow” Stetson, Jackson’s Amanda King is paired with the Scarecrow from The Wizard of Oz.

Retrieved from "https://familyguy.fandom.com/wiki/Scarecrow_and_Mrs._King?oldid=231881"
Community content is available under CC-BY-SA unless otherwise noted.