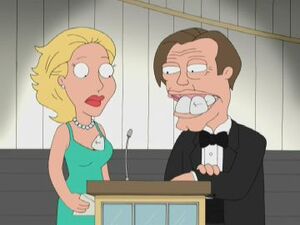 Scarlett Johansson (born November 22, 1984) is an American actress and singer. Johansson made her film debut in the 1994 film North and was later nominated for the Independent Spirit Award for Best Female Lead for her performance in 1996's Manny & Lo. Johansson rose to fame with her roles in 1998's The Horse Whisperer and 2001's Ghost World.

She appeared in "Road to Germany" as a presenter at the Academy Awards with Steve Buscemi.

When Meg gets to go into a closet to make out at a Halloween party in "Halloween on Spooner Street", she compares herself to Scarlett Johansson. The scene cuts to Scarlett attending a red carpet event, and her beauty makes every paparazzo want to photograph her.

Lois pick's Scarlett Johansson over Kristen Stewart in one of the guy's sex games at The Drunken Clam in "Total Recall", making note of her boobs and Kristen's perceived lack of cleanliness and ass.

Scarlett is listed as a celebrity that went on to be successful despite exposing themselves in "An App a Day".

When Peter screws up his shopping list in "Dog Bites Bear", he mentions Scarlett as one of the items he needs to get.

Retrieved from "https://familyguy.fandom.com/wiki/Scarlett_Johansson?oldid=201943"
Community content is available under CC-BY-SA unless otherwise noted.