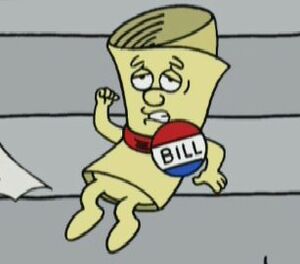 In "Mr. Griffin Goes to Washington", The Bill appears singing "They Call Me Bill", a parody of the song "I'm Just a Bill", that ends with him being picked up like trash.

Peter expresses "It’s great to learn, ’cause knowledge is power!" from Schoolhouse Rock! in "Brian Wallows and Peter's Swallows".

While trying to join a skinhead gang for his safety in "Shanksgiving", Peter tries to psych himself up to shiv Cleveland by blaming him for the Schoolhouse Rock! Bill becoming a law.

Retrieved from "https://familyguy.fandom.com/wiki/Schoolhouse_Rock!?oldid=218996"
Community content is available under CC-BY-SA unless otherwise noted.