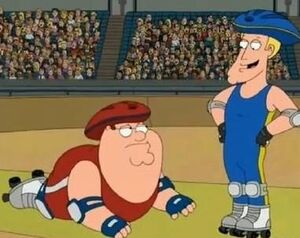 Schpupel is a game in which two opposing players race on rollerskates toward a cylinder containing balls. The object of the game is to be the first player to the cylinder, grab a ball from the cylinder, and pop it by jumping on it, then calling Schpupel. You are allowed to throw balls at your opponent, making it more difficult for them to finish before you do.

The game is Swedish in origin and is the preferred sport of Fjurg Van Der Ploeg, Schpupel champion. Fjurg defeated Peter Griffin in a game of Schpupel in "Tales of a Third Grade Nothing".

Schpupel is a parody of the Swedish game Spökboll, which is Swedish Dodgeball, a game which is sometimes played during physical education lessons in schools.

Retrieved from "https://familyguy.fandom.com/wiki/Schpupel?oldid=150426"
Community content is available under CC-BY-SA unless otherwise noted.