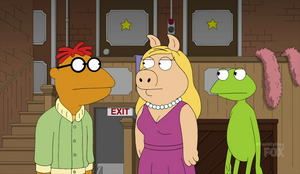 Scooter is a muppet, and originally served as an assistant backstage on The Muppet Show.

As an elderly Seamus has been kept on hold for years for Spirit Airlines in "Rich Old Stewie", Scooter steps into his room to announce that it's almost time to go onstage. Seamus is torn between wanting to fly to Pittsburgh and hosting The Muppet Show.

Retrieved from "https://familyguy.fandom.com/wiki/Scooter?oldid=219699"
Community content is available under CC-BY-SA unless otherwise noted.