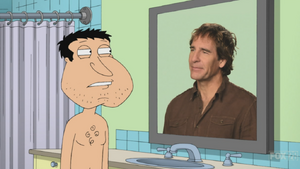 Scott Stewart Bakula (born October 9, 1954) is an American actor, known for his role as Sam Beckett in the television series Quantum Leap, for which he won the Golden Globe Award for Best Actor – Television Series Drama in 1991 and was nominated for four Emmy Awards. He also had a prominent role as Captain Jonathan Archer in Star Trek: Enterprise.

He appears as one of the panelists on Hollywood Squares in "If I'm Dyin', I'm Lyin'".

When Quagmire worries after helping to burn down Goldman's Pharmacy in "Burning Down the Bayit", he claims he looks in the mirror and sees someone else. A cutaway shows Quagmire seeing Scott in live action in his mirror.

Retrieved from "https://familyguy.fandom.com/wiki/Scott_Bakula?oldid=199363"
Community content is available under CC-BY-SA unless otherwise noted.