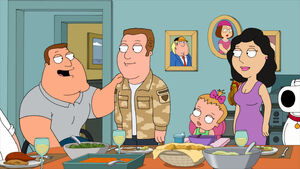 Scott Richard Grimes (born July 9, 1971) is an American actor, voice artist and musician. Some of his most prominent roles are his appearances on ER as Dr. Archie Morris, Party of Five as Will McCorkle, Band of Brothers as Technical Sergeant Donald Malarkey, and the popular animated sitcom American Dad!, voicing Steve Smith.

In the DVD version of "Trading Places", Scott provided the vocals for "Revolution in the Air", a musical number cut from the broadcast episode.

Scott provides the voice of Kevin Swanson beginning with "Thanksgiving".

Retrieved from "https://familyguy.fandom.com/wiki/Scott_Grimes?oldid=132297"
Community content is available under CC-BY-SA unless otherwise noted.