Screams of Silence: The Story of Brenda Q. 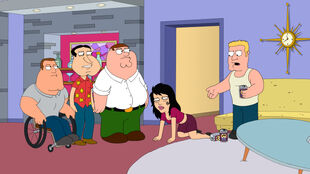 Screams of Silence: The Story of Brenda Q.
When Quagmire recovers from his "accident", he learns that his sister Brenda needs his help.

Plot: When Peter and Joe return from a fishing trip with Quagmire was suspiciously absent, they check on him to find he tried to hang himself in auto-erotic asphyxiation. While Quagmire recovers from his "accident" at the hospital, his sister Brenda and her abusive boyfriend Jeff come to visit him. While Quagmire is unconscious, Brenda sings him a childhood nursery rhyme to help him recover causing him to wake up. Despite Jeff's complaints, Brenda agrees to take care of Glenn while he recovers. As the entire neighborhood is kept awake with Jeff's rants, Lois tries to talk to Brenda about leaving Jeff on a day out at a restaurant. When Brenda suspiciously continues to wear sunglasses inside the restaurant, Lois discovers Jeff gave her a black eye. Brenda tries to justify Jeff's treatment to Lois' disgust. 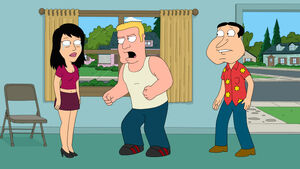 At The Drunken Clam, the guys discuss Jeff and Brenda. Quagmire worries that some night Jeff may actually kill her but Joe claims he can't act until after the fact and suggests an intervention. Most of the intervention goes badly with Meg suggesting that Brenda change Jeff, Chris getting mad at Joe for calling him the wrong name and Peter changing the topic to smoking cigarettes, but Glenn makes a heartfelt plea and seems to have won over his sister until Jeff walks in. When Glenn tries to show Jeff the door, Jeff has Brenda announce that they're getting married because she's pregnant. Later that night over cards, Glenn continues to worry about Jeff's treatment of Brenda. When Joe comments that he wishes they could just beat him up, Glenn jumps on the suggestion and even recommends they kill him. Joe tries to put the brakes on the plot, but just then they witness Jeff ranting and striking Brenda and agree to waste him. 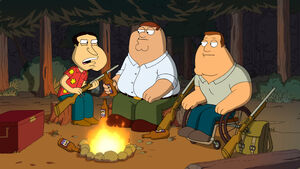 The guys go over to Quagmire's house and invite Jeff on a midnight hunting trip. While in the woods, Jeff claims he is surprised that Quagmire would invite him as he knows Quagmire hates his guts. Peter nearly slips the plot and Jeff goes off to take a whiz. Quagmire picks up his gun and says he's determined to just shoot Jeff when he returns but Jeff slips up from behind and points his gun at Quagmire's head. After ranting at Glenn, he smacks him to the ground. Joe reaches for his shotgun, but Jeff threatens to shoot Quagmire in the back of the head. Joe is momentarily stunned when he suggests they all put the weapons down and Jeff complies. When Jeff asks if they will also follow though on Joe's promise to forget the entire thing, they agree but Quagmire refuses to let it go. Jeff knocks Peter and Joe unconscious with the butt of his shotgun and takes Peter's car with Glenn out deeper into the woods intending to kill Quagmire. Glenn challenges Jeff's manhood, saying he has to shoot someone and Jeff agrees readily to do the job with his fists. Jeff beats Glenn senseless and then proceeds to strangle him until he collapses. Jeff grabs a shovel to bury the body only to be illuminated by the car's headlights. When Jeff is surprised that Glenn is still alive, Glenn shouts that he strangles himself everyday and runs down Jeff, crushing him against a tree. When then guys arrive back at the house the next morning, they find Brenda in tears over Jeff's failure to return. They give her a note they faked explaining that Jeff thought it would be best if he left. As Brenda breaks down in tears over Jeff, Peter notes that he wishes he could kill someone else and gets an idea about Mort Goldman.

Previous Episode /// Screams of Silence: The Story of Brenda Q. \\\ Next Episode