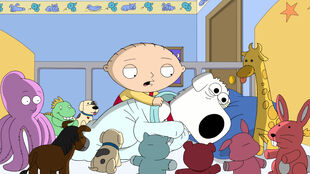 Seahorse Seashell Party
Part of FOX's Night of the Hurricane with a hurricane affecting all three Seth MacFarlane shows. 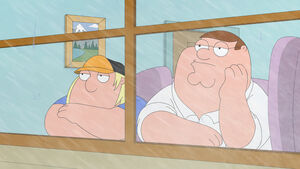 When the television goes out leaving the Griffins housebound during a hurricane, Brian decides to ingest psychedelic mushrooms. Meanwhile, the rest of the family is bored and insult Meg. When Brian starts to trip out he leaves and is followed by Stewie who observes him cutting off his own ear. Patching him up, Stewie sticks by Brian while he trips, seeing weird and disturbing things. 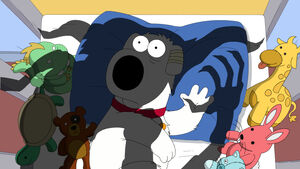 While Peter hums along to the opening theme from Indiana Jones and the Last Crusade, Meg opens a can of soda and the resulting noise makes Peter snap at her. When she turns on him, both Lois and Chris chime in and she turns on them, pointing out their own faults. Her attack on Lois leaves her devastated, particularly when she points out that when she turns eighteen she doesn't know if she wants to be around any of the family ever again. And when Peter tries to inject some humor with a comment, Meg brings up that his own faults may be the worse of all. Peter tries to laugh it off, even when she points out that his kids are a disaster which raises a small protest from Stewie. When it finally dawns on Peter that he's been insulted he turns to Lois for support. Lois in turn rips into him for not supporting her and soon Chris, Lois and Peter turn on each other. Peter runs off in tears and Lois goes after him. Chris also leaves and Meg sits back to reflect on her actions. Having observed the way the family turned on each other, Meg feels that perhaps she has a purpose to act as the family lightning rod to work out their frustrations. When she apologizes, she takes the heat and allows the family to blame her for their fight, leaving everyone feeling better about themselves.

Retrieved from "https://familyguy.fandom.com/wiki/Seahorse_Seashell_Party?oldid=178977"
Community content is available under CC-BY-SA unless otherwise noted.