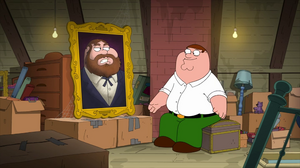 Shaun Mark "Sean" Bean (born 17 April 1959) is an English actor of stage and screen. He is known for portraying Boromir in The Lord of the Rings film trilogy. Other films and shows include Game of Thrones, the James Bond film GoldenEye, Troy, The Island, Percy Jackson & the Olympians: The Lightning Thief and Black Death.

Sean Bean provides the voice of the painting of Peter's ancestor in "No Country Club for Old Men".

Retrieved from "https://familyguy.fandom.com/wiki/Sean_Bean?oldid=194752"
Community content is available under CC-BY-SA unless otherwise noted.